So many untold stories -- So little time 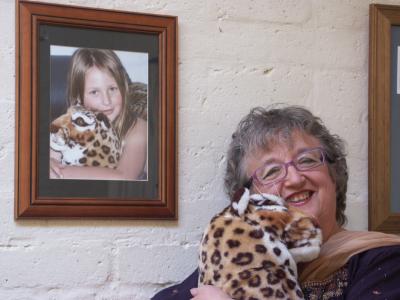 My favourite photo of Madison and me

WELCOME - to my family pages

Requiem for a Nun William Faulkner 1951, "The past is never dead. It's not even past." Especially in these pages, fellow shakers of the family forest.

I have been researching the family for over a decade. I migrated to Australia with my mother and step father from England in 1957 when I was 10. Some 50 years later, I think of myself as an Australian who was born in Britain.

The spark that ignited my quest to find the history of the family came from the debate in Australia about the value of migration. Naturally, being one of those migrants, I believe that Australia benefits from the newcomer, who in time become just another Australian, albeit a 'NEW' one.

The genes of people who have the determination and courage to leave the known for the unknown, in a search for a better life for their children if not for themselves, surely enrich future generations. Why are Australians brave, free thinkers, hard workers, hard players and why is there a healthy distrust of authority? Why is Australia a land where everyone is as good as the next person, and valued for what they put in and not for how much money and class they were born into? I believe it is because the breeding stock are those courageous enough to take the plunge. Some I know were sent, as opposed to went. Those who saw and took the opportunities to carve out a better life than they could ever have hoped for back in Britain, prospered. And multiplied.

I looked at my granddaughter, and I wondered just how many families had had to make the decision to chance everything on a new beginning in order for this one beautiful little Australian to be who she was. What were the stories of those who went, or were sent? And is our family's history one that shows that migration really does concentrate those traits into a population? I set out to resolve that question.

That was in the beginning. I still want to get to a point where I can almost answer that, but along the way I have found new avenues of research.

Some worked down the mines. What was that like, especially when you are only 12? Some had money that disappeared within a generation. Where did it come from and where did it go? Why is it that so many had babies a few short months after marrying, when I believed that 'promiscuousness' was a modern phenomenon?

Then I discovered the world of the herstory of the common (wo)man. What a wealth of information there is out there. We have stories of the lives of WW1 Diggers in the trenches along with those of the medal winners and those of the non-combatant decision makers, but I don't think we have enough from other sources. I set out to discover some of those stories for myself.

My first offerings on this web site were the direct ancestors of my granddaughter, my half sister, and my cousin. All those found so far anyway. I have now extended that to include the BAYFIELD, the BEALES, and now as at Feb 2011 the CULLING and the EVERRETT lines. Three years on I am still adding more families. Think of them as our cousins and in-laws. You will see the options in the top menu bar. Over time I will be adding other branches.

In 2014 I began a newsletter. Each edition will include a story recently uncovered, and will have details of newly discovered on-line research repositories. Please do subscribe -  http://tinyletter.com/shirley_elrick

I gratefully acknowledge all those who have assisted me in my research. I would not have known where to start if it had not been for Dorothy May CHUGG who compiled her family tree some time before 1950 on a clunky manual typewriter. Dorothy did not have the internet as we do, so I am certain it was a painstaking job. One can see she loved doing it as much as I do. My aunt Jean and cousin Shirley are ongoing collaborators in England. My sister in law has done invaluable work that she has let me share on the Tasmanian side of the family. A fellow researcher related to the WALPOLE/TUDOR families sent me copies of old family photos that are now exhibits on this site, adding some beautiful sepia colour to the stories. And many many more unnamed and in some ways unknown people who freely allow others access to all their hard work. My thanks to you all.

In Nov 2010 I was contacted by a cousin from my JACKSON line. He sent me some photo's. Where would any of us be without each other? He and I are now going to work together on resolving some of the JACKSON/JOHNSON queries.

I was lucky enough to have had contact from cousins who, as unlikely as this seems to us historians who are met with blank faces every time we mention any date earlier than last week, are also researching the same family. Paul CULLING is a genuine gene-connected relative who is an Australian like me. He came here via South Africa! A FLATMAN cousin has given me access to accumulated FLATMAN family research. Raymond GODDARD, who is researching the THOMPSON/POLLARD family, is sharing data and some memories of my immediate family with me.

Sidney PATTERSON, a military historian and a relative, corresponds with me often. He gives me the courage to publish my thoughts. He has also freely shared with us many of the images - and indeed the information - that you have access to via these pages. This site would be far  drearyer without his valued input.

The work I have invested into the data you can access via these pages has been repaid a dozenfold. So many people have, thankfully, contacted me to discuss the details, correct my errors, and to ask for assistance with their own research.

The content of these pages is but the tip of the iceberg. There are more events for these ancestors of ours, and many thousands of ancestors, partners and descendants that are recorded in my off-line database. There are even a few complete strangers who happen to have the same name in the same place as ours. I am interested in furthering not only my research, but yours as well. If you have any corrections or comments, or if you think we have any twigs in common, please contact me.

ONE WORD OF WARNING regarding my methods. I use my database as a research tool, as it produces lists and reports. In essence, this means that in order to make the best use of this facility, I have to standardise the spelling of the surnames. As an example - take the CHITTOCK family. Some branches of this family have the name CHITTICK, but those people appear in these pages as CHITTOCK. I have not found a way around this, and I apologise to all the CHITTICKs, ELRICHs, JOHNSTONEs, DUMPLEDINEs and WHATLINGs 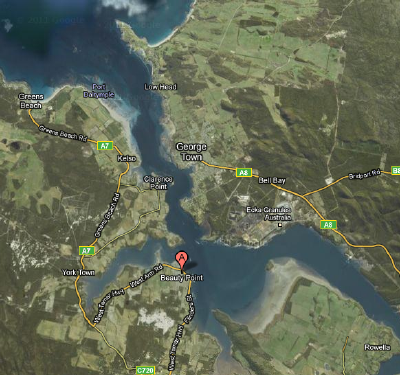 Small world - In 1936 Thyra and Ted ELRICK, my Husband Alan's parents, were living in Beauty Point, Tasmania. In 1820 or so, my ancestor John PURCELL was born in George Town, on the opposite bank of the Tamar. He was the child of one of the soldiers sent to 'take care of' the convicts.  John returned to England with his parents, having no further connection to Australia.

In 1957 I came to Australia, having no idea that I had an existing link to my new country, let alone Tasmania . In 1968 I married Alan, bringing closer togther separate threads into what I think of as a circle of circumstances. I did not discover my relationship to the Tamar River area until 2000 or so.

One day my grandchildren may stand on one bank of the Tamar, look over to the other, and consider all the myriads of decisions and chance meetings that wove around the world, leading finally to 'them'. In my mind's eye I can see Madison on one shore, Sam on the other, at night, with torches. One torch shining into the other, symbolically closing the loop.

Closing the loop of this circle, yes, but of course the thread of life goes on and on and on. The possibilities are endless.

July 2015 - Added KNIGHTS and others to the PATTERSON family

May 2016 - Lots of new people, no bulk removals.  I have incorporated a timeline of each person. Still needs work, but it adds a new way of looking at a 'life'.

March 2017 - My, how time flys. I have been working away, but have not made the decision to update for months. Remiss of me.  Too many changes to document, think of this update as a New Beginning.

August 2017 - My God, how time flies. I have had a DNA test, results to date are reflected on these pages. Refer to Icons in use. Note though that these pages are set to be ancestors of my grandchildren, my half sister and my cousin Shirley EASTOE. MY DNA on the other hand is only relevant for my acestors.  If you think about it, you will understand.